My Newest Book--WAIT FOR THE WIND 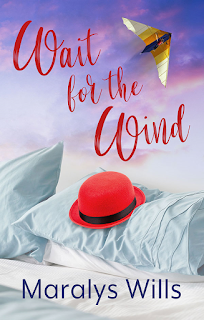 Death stares Jenny Winfield in the face. At 18,000 feet above the valley floor, her hang glider jerks and bucks and threatens to go inverted. Beside her, hanging in his own harness, Scott McCabe is unconscious.  She is the novice, yet it is suddenly up to her to save both their lives.

When Jenny first meets Scott, such a scenario is unthinkable. She knows nothing about hang gliding and is plagued by a fear of heights. Further, she cannot imagine herself attracted to a man whose very soul is pre-programmed, and yes, often unyielding.

Jenny is a free spirit with no sense of time, and Scott is a disciplined, clock-watching commercial airline pilot--with secrets too painful to reveal. Clearly, such disparate personalities will never be lovers.

Yet fate throws them together when the two jointly inherit a struggling hang glider manufacturing company. The year is 1980. Jenny is charmed by the passion she sees in the youth-oriented business . . . while Scott is disgusted by the sloppiness of the place—especially when he witnesses a young man flying across the assembly room on a trapeze. He wants no part of it, and immediately tries to sell the company while they can still recoup a few dollars.

Abruptly the two realize they must compromise and make decisions neither really wants. Conflicts emerge: who will prevail in their differing views of the enterprise? Will Jenny overcome her fear of heights to fly as part of an epic and terrifying hundred-thousand-dollar hang gliding contest?

In a final twist, it’s Scott’s unyielding honesty during a vital competition that nearly ends their chance at lasting love.

As background for this story, two of my sons were famous in hang gliding circles—the oldest as champion of the United States, Canada, and Great Britain. In 1975, they made Skyriders, a 20th Century Fox hang gliding movie. Many of WAIT FOR THE WIND’S zaniest scenes were drawn from actual events as my  family endeavored to keep our well-regarded hang gliding company alive.

Who could have predicted Wills Wings is now the world’s premier company?

To Purchase book from Amazon: WAIT FOR THE WIND

Posted by Maralys Wills at 7:14 PM No comments: