IN MEM0RIAM: OUR PAL, OLLIE 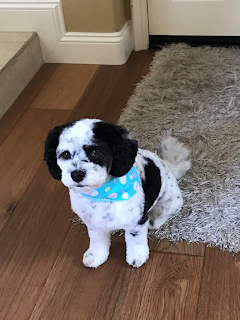 To all of us, Ollie was a movie dog.

He was a small Cavashon, black and white, peeking out through one black eye. But what set him apart was his way with people. He assumed Rob and I were his relatives, and  behaved as if we needed welcoming on each new occasion.  Miraculously, he knew we’d arrived at Tracy and Paul’s before we quite knew it ourselves.  Even as we approached the front door we could hear him on the other side, whining and yipping, as though to say, Get the door open, please, I need to see you. And true to his loving nature, he wiggled and wagged as we cleared the entrance, soaked up the feel of our hands on his curly-haired body, then rolled over for a last stroking of his belly.

For seven years, he greeted us thus.  We dared not move deeper into the house until we acknowledged that yes, he was our long-lost cousin.  Then he trotted to the couch and snuggled down next to Tracy.

As far as we could tell, he never cared much for dogs.

Besides his overflowing enthusiasm, Ollie had tricks. He was clever enough to batter open the plastic ball which contained special treats.  He sat when anyone said “sit,”  he rolled over when ordered to do so, and he lay quite still when someone said, “bang  bang.”

Most of this was in place before Tracy’s Paul arrived.  Once Paul was there for good, we observed the blooming of a new relationship.  Ollie knew a special person when he met one. Before the first month ended, Ollie was following Paul everywhere, upstairs and down, sometimes waiting for attention, but more often expressing his eagerness for their nightly walk.  He’d staked out his time as eight-fifteen, and though we’re fairly sure he never wore a watch, each night from that instant on, he sat on his haunches near Paul, gazing up at him with a look that defined the word “adoration.”  That expression is  how I’ll always remember Ollie.  It turns out he even came to warn Tracy, once, when he thought Paul was in trouble.

Today, around noon, Ollie died.  We can’t go into detail, but at heart he was a delicate little creature, and it turned out this was a digestive problem gone wrong . . . and all because of a smoked pork bone from a high-end pet store—which we didn’t know was deadly for dogs.

Ollie’s whole family is devastated.  None of us are dogs, to be sure, but Ollie thought we were.

Posted by Maralys Wills at 3:28 PM